My daughter’s increasing vocabulary is, I think, quite impressive. Even if we allow for a natural parental bias, of which I am happy to accept I am almost certainly guilty, I think Little Proclaims can say an awful lot for a twenty-month old. And thanks to a relentless effort on the part of Mrs Proclaims (with the occasional, far less competent, input from yours truly) she can say an awful lot in both English and French.

Obviously some of my daughter’s rhetoric can be a little prosaic; that, alas, is the nature things. But while I would probably find it unimaginably dull if an adult or adolescent spent five minutes telling me that something green is, in fact, green, I find it charming and quite compelling when my offspring does it.

She speaks as she finds, and indeed calls a spade a spade. Well no, that’s not true. She calls a spade a key. But in her defence that’s because the spade she is referring to is a small brightly-coloured plastic spade and the keys she is used to dealing with are large, brightly-coloured, plastic keys, so, in fact, do look rather similar. Plus she uses the French word for key when mis-naming the spade so as mistakes go, it could be worse.

She does call a rake a rake and again it is a small brightly-coloured plastic rake. Sometimes she attacks my face with said rake. I find this less charming if I’m honest.

Anyway, the point, if there is a point, is that my daughter can speak and also that my house is fairly full of brightly-coloured plastic toys.

Some of these toys, like the aforementioned rake, spade and indeed keys, are just inanimate bits of plastic that cost very little and bring my daughter an inordinate amount of joy. Frankly, when she’s not attempting to cause me physical harm with them, I’m perfectly happy with their existence.

Some other toys are more ‘interactive’. They talk, they play music, they make animal noises and they irritate me beyond belief.

But she loves them too, so as a good parent I tolerate them. A bit. Then I hide them.

In fairness, some of these louder toys have definitely contributed to her ever-increasing vocabulary and I shouldn’t discourage their use. Except when they are shredding my last nerve and then I think it’s probably ok to discourage their use a bit, and let her attack my face with a rake. Sometimes it’s the lesser of two evils.

Most of the interactive toys are fine though. There’s a stuffed toy called Violet that even knows my daughter’s name and sometimes sings about how she and my daughter “like to do everything together”. Although there are days when Little Proclaims enjoys the company of Violet, there are other days when she is completely indifferent to her, instead preferring to play with an inanimate plastic rake (she loves that rake) and I do feel that Violet can come across as a little needy and clingy on those occasions. Maybe I should re-programme Violet to sing about how she likes spending time with me. I’m sure I’d be a better friend than my daughter. I have no interest in plastic rakes. I wish there were less of them in the world.

Anyway, the loud toys are all well and good when my daughter is playing with them, but they can be something of a nuisance when she isn’t. She, being a toddler, doesn’t really tidy up after herself and so these toys lie in wait for me, like booby traps and, often when I’ve just got her off to sleep, I’ll accidently kick one and set it off and suddenly the room is filled with flashing lights and irritating music and my once sleeping daughter is wide awake again.

Or, when she is finally properly asleep, I’ll be sitting down to enjoy half an hour of watching TV or listening to music and I’ll sit on a toy and it’ll go off and ruin the brief oasis of calm and tranquillity I’ve  created for myself. And once you set these things off, they never stop. You’ll think they’ve stopped and allow yourself to relax and then, seemingly apropos of nothing, they’ll start up again with their tiresome tunes.

But most of these toys do have an off-switch. So even the most persistent offender can be silenced.

All except for one.

And that is Nanny Plum’s Wand. It looks like this: 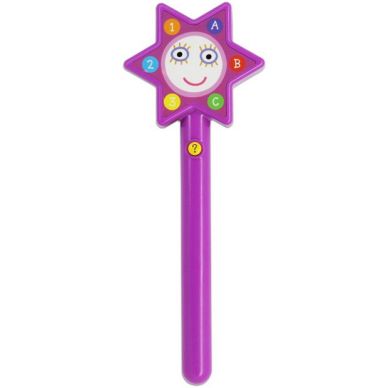 Now I didn’t know until I did a bit of cursory research for this post, but the character of Nanny Plum comes from a TV show called ‘Ben and Holly’s Little Kingdom’ and it’s produced by the same people who make ‘Peppa Pig’. I watch a lot of Peppa Pig. My daughter loves the show, and I must confess I find it more tolerable than some of the other stuff she likes to watch. We’ve never watched ‘Ben and Holly’s Little Kingdom’ but I imagine she would love that too and I probably wouldn’t hate it.

So I have no problem with the show that brought us this toy. It is the toy itself that drives me nuts.

Mostly because you can’t switch it off. And when you set it off by accident it is incessant. It just won’t shut up. It asks questions and if you don’t get the answer right, it keeps asking and asking and asking.

“Hold on though James,” I hear you cry, “surely, as an adult, you can easily answer the questions asked by a child’s toy?”

And yes, I do know the colour of a goldfish. And even though I have no knowledge of the show, I could surmise that Nanny Plum’s dress is probably purple.

But this question stumped me for a long time:

“What colour does an Elf wear?”

Because these are some of the elves I’ve come across in popular culture:

Now, I’m not saying this is, by any means, an exhaustive list of elves, but I think we can agree that a reasonable answer to the question above would be that “an elf wears green”.

But it turns out that in ‘Ben and Holly’s Little Kingdom’ elves wear blue.

But if you don’t already know that, how could you possibly guess? If the answer isn’t green (the most obvious to people with no prior knowledge of Nanny Plum’s world) then it could feasibly be any colour. And my mind did not take me to blue.

So the wand wouldn’t shut up.

And I couldn’t turn it off.

Because there is no off switch.

If this was a toy that my daughter only took a passing interest in then it would have found it’s way to a charity shop a long time ago.

But she loves it!

Incidentally, we didn’t buy this toy.

It was given to us by another family who were having a ‘clear-out’. We get a lot of our daughter’s stuff via other families having ‘clear-outs’.

Mostly it works well and I confess, when we first got the wand it seemed quite generous, given that the little girl who was parting with it seemed to me to still be very age-appropriate for this toy.

But it didn’t take me very long to work out why her parents were quite happy to remove it from her itinerary of toys.

And suddenly it seemed a little less generous (although I don’t begrudge them this particular ruse because as soon as I feasibly can, I will also be ‘generously’ giving this toy to another child.)

Still I’d be tempted, for their daughter’s next birthday, to buy her the loudest and most interactive toy I can find.

Preferably with no off-switch.

But, if I think that plan through to it’s natural conclusion then we’d only get it back in a year or so.

And my daughter would love that toy too.