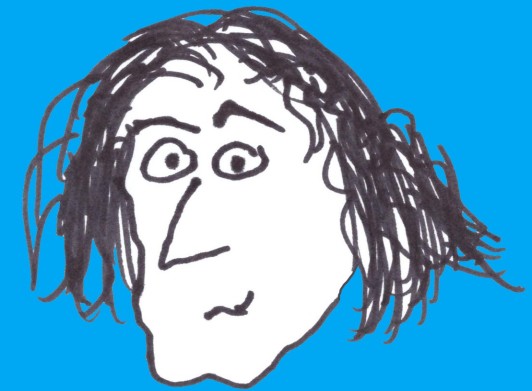 Welcome back to Artist’s Corner, the bit of my blog where I wow the world with my artistic talents. Of which I have few.

Prior to my April love letter to the cartoons of my youth, I was using this bit of my blog to pay homage to some of the great literary figures of days gone by. To be fair, they were mostly literary figures whose work I’d never read.

But happily, today’s literary great is someone I can get on board with, because I do enjoy a bit of Oscar Wilde. Indeed I’ve paid homage to the great man on this blog before – in this brilliant piece I wrote way back in the early days of my blogging adventure.

So, it only seems appropriate to pay homage to him again.

Mainly because I drew a picture of him.

Although, I do live Reading, which is of course where he spent some time. Granted, that time was spent in Reading Prison (then known as Reading Gaol) so I don’t suppose he was too fond of the place. I wouldn’t hold that against him. It’s not like he deserved to go to prison, he was just unfortunate to live in less enlightened times.

Indeed, as a town, we are rather fond of our Oscar Wilde connection. Reading Prison ceased actually being a prison back in 2013 and last year it opened its doors to the public for a brief period of time, when it was used to host an art exhibition. I went to it and it was pretty good. Some of the art went over my head a bit, but the history of the prison was a genuinely intriguing reflection of social evolution over the last hundred(ish) years.

Wilde’s cell was open to the public during the exhibition, but, as it had been a working prison up until it’s recent closure, his cell was pretty much the same as all the other cells. Which were all horrible and definitely served as a reminder to me not to commit any crimes.

Or at least not to get caught.

There are a lot of rumours about what is going to be done with the old prison now it’s no longer in use.

One rumour is that they’re going to turn it into a theatre.

I think Wilde would appreciate the irony in that.

← Films I Watched When I Was Younger – Issue 12: Last Man Standing
Life Style →