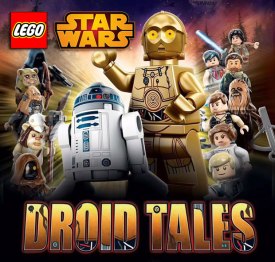 When I was a kid, Lego was essentially a load of plastic bricks that you tried (and generally failed) to build stuff out of. Even back then you could buy kits that had particular themes, I remember having a space themed set, but by and large most new packs of Lego were just dumped in with any you already owned, you built what you could out of what you had and your imagination did the rest. It was pretty good fun, everyone had a set, but hardly anyone would have said it was their favourite toy. Even if it was their favourite toy. It was ok to like Lego, but it wasn’t especially cool.

At some point that changed and these days you can get Lego in all kinds of different themes, and many of them are linked in some way, shape or form to major movie franchises. The likes DC and Marvel, Disney, Harry Potter, Indiana Jones, Ninja Turtles and countless others have been represented in small plastic brick form at one point or another.

And obviously Star Wars is no exception.

But Lego has become more than just small plastic bricks in recent years and most people would be familiar with 2014’s ‘Lego Movie’ and it’s subsequent sequels and spinoffs. Cynical marketing ploys or not, they are definitely entertaining and frankly hardly any animated feature film isn’t a little bit about selling lots of toys, so I’m not going to hold it against Lego – at least they had the decency to make their movie enjoyable.

People might be less familiar with the various Lego short films, and TV specials which are also available for consumption on various platforms. But there are a lot of them.

And again, Star Wars is quite well represented.

And given that some of them are on Disney Plus, which has been something of a facilitator in my making my month-long tribute to Star Wars possible, I thought I might watch one of them.

There were a few to choose from, including a proper full length TV series called ‘The Freemaker Adventures’. But that was too long, given how much other content I’ve been trying to cram in.

So instead I went for a shorter series, called ‘Droid Tales’, which consisted of five twenty-minute episodes.

And I’m going to write about it now.

But first a spoiler alert:

Spoiler Alert: Are you really planning on watching a Lego Star Wars cartoon? Really? And you’ve decided, out of all the various options available, you’re going to watch the one I’m writing about here? Ok, well then I might spoil it for you if you read on. But probably not, because it is, after all, a Lego Star Wars cartoon and it’s probably not worth being that precious about plot details.

I actually did really enjoy this and not in a ‘it was slightly better than I thought it would be’ way but in a ‘that was really funny and very well made’ kind of way.

It’s genuinely really good. It’s not really Star Wars as you know it, but it’s not trying to be. It’s a parody more than anything. Made of Lego.

I suppose, having seen the Lego movie and 2017’s ‘The Lego Batman Movie’ I should been expecting this to be quite tongue-in-cheek, but it really is laugh out loud funny.

In essence, ‘Droid Tales’ is a recap of the first six movies, as told by C3PO (who is, as always, voiced by Anthony Daniels). But it’s also a complete send-up of the movies. It’s all in good taste and it’s done very affectionately, but it doesn’t take any prisoners and ‘The Phantom Menace’ is mocked pretty mercilessly.

I’ve pretty much enjoyed everything Star Wars related I’ve watched in the last month, but, given that I really only watched this on a bit of a whim, I’d have to say it was a surprising highlight and I’ll now definitely be watching all of the other Lego Star Wars cartoons at some point in the near future.

Most of the characters are pretty funny, but Palpatine made me laugh more than most. Probably because he is still, even as Lego, completely evil, although somewhat less competent in small plastic brick form.

The characters tend to be funnier when they are exaggerations of their movie personas and Admiral Ackbar, possibly because he is essentially a minor character in the films, is less based on source material and the joke seems to be mainly about him having a spaceship called Daisy-Mae. Which isn’t all that funny really.

Because they cut short their holiday to help C3PO find R2D2 and also because they are wearing Hawaiian shirts. Which is pretty funny.

And that’s all I’ve got to say about ‘Droid Tales’. Tune in tomorrow when I’ll be writing about ‘The Mandalorian’. And about time too…

3 comments for “May The Twenty-Ninth Be With You: Lego Star Wars: Droid Tales”