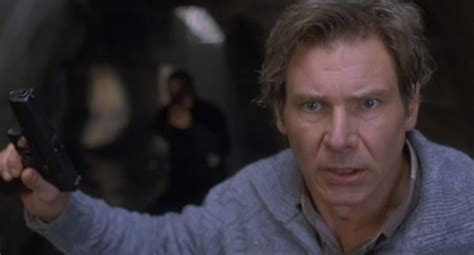 It’s a valid criticism of modern cinema that much of the current output comes in the form of sequels (and indeed prequels), or remakes/reboots of movies that already exist. Or multiple adaptations of the same novels. Or big screen reimaginings of much-loved TV series. The resurgence of the small screen, thanks in part to online platforms, has also seen a trend in the opposite direction – TV series are now being made that are re-imaginings of much-loved movies. There is, apparently, a dearth of new ideas. Or more likely there is a dearth of new ideas that anyone is prepared to take a financial risk on.

Then again, if it’s become more prolific in recent times, it’s clearly a practice that has been around for a while.

A lot of films I saw in my youth were big screen adaptations of older TV shows and, to be fair, done in the right way, the results can be some pretty decent movies.

1993’s The Fugitive is one such example.

Based on a 1960s TV series of the same name (that I have, admittedly never seen – although it was apparently pretty good) The Fugitive tells the tale of Dr Richard Kimble (Harrison Ford) a man wrongly convicted of murdering his wife. Through a road traffic accident (that is admittedly quite convenient but fairly important to the narrative) he manages to escape the bus that is transporting him to death row. Once free he has to juggle the seemingly impossible task of proving his innocence while at the same time not getting caught. Pursuing him with a dogged determination is Deputy U.S. Marshal Samuel Gerard (Tommy Lee Jones – winning a whole raft of awards for his performance), a man who is rather less concerned with whether or not Kimble is guilty than with the fact that Kimble’s continuing freedom wounds his professional pride.

The plot holds few surprises, we know Kimble is innocent, we assume correctly that he’ll prove that innocence and the bad guy, when he is finally revealed, is pretty much the most obvious candidate. Were he wearing a T-shirt from the outset with the logo “I’m the bad guy” emblazoned across it, the revelation of his villainous status would hardly be any less of a bombshell.

It’s not the outcome that thrills but rather the journey it takes to get there. The pace and tension within the film is relentless. If there are plot holes and clichés running throughout the narrative it’s pretty hard to care. Add to the mix strong performances from both Ford and Jones and The Fugitive is a thriller that actually manages to thrill.

Whether it’s especially faithful to its source material seems irrelevant when the resulting movie is this good.

It’s a shame that can’t always be said of remakes, reboots and adaptations.

← Coping With Stress
Can Can →

9 comments for “Films I Watched When I Was Younger – Issue 3: The Fugitive”