No-one enjoys a bit of washboard percussion more than I.

But apparently the washboard wasn’t created as a musical instrument. It’s actually, believe it or not, a device for doing laundry, but the invention of the washing machine has rendered it all but redundant in this capacity.

The world is full of such labour-saving devices. It’s why so few of us employ servants these days, unlike all those people in period dramas. It’s much better this way, because now I can choose to live in a small two bedroom house, rather than the much larger property that would be needed to accommodate all of my hired hands. And it might be less environmentally friendly but driving a small, second-hand car is much simpler than maintaining a coach and horses. Also I’m a little bit afraid of horses (and cows for that matter. And if I really think about it, I wouldn’t want to be locked in a room with a giraffe. It’s an unlikely scenario I grant you, the room would need pretty high ceilings for starters).

But labour-saving devices aren’t just about not needing servants. Technology has improved our lives immeasurably and I’m always amazed by the latest developments. Smartphones are brilliant. Now wherever I am in the world I can be frustrated by slow internet connections, and I’m never burdened by the necessity to actually have conversations with people who are in the same room as me. And I can take photos and upload them to social media instantly so everyone can know where I am and what I’m doing, whether they are interested or not.

Just looking around the room I’m in now, I can see loads of technological things that make my life better, such as a digital photo frame, which means I don’t have to look at the same treasured picture that I’ve lovingly picked out and chosen to display but rather hundreds of largely inferior photographs that alternate regularly, or would do if the device was actually plugged in. And I’ve got a shredder, which saves me having to individually rip up each of the highly confidential documents that I dispose of on a daily basis. Also in the room is an electric guitar, which is much more efficient than the old ‘manual’ guitar I used to own.

But even I, lover of technology that I am, was perplexed by the electric egg-boiler that my sister gave me for my last birthday. Boiling an egg is inherently easy. If, when describing a person you were to suggest that said person “can’t even boil an egg” you would be saying that that person is a bit inadequate, at least when it comes to culinary skills. 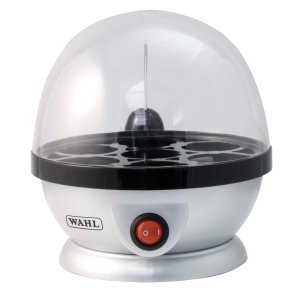 So as labour saving devices go, surely an electric egg-boiler is all but pointless?

Now all I need is an electric toast butterer. And maybe an electric machine to cut the toast into soldiers for me as well.